Center for Wilderness Safety is one of only a handful of Dept. of Defense licensed program providers, offering the national Stop The Bleed program - serving the greater Northern Virginia area only.

We are proud to announce that we now offer the Free STOP THE BLEED Training in two formats: a 2-hour 100% In Person format, as well as a new Online format. So what’s the difference? While they are both fundamentally the same, the big difference is actually the length of each format and how each is setup. If you learn better in a relaxed setting, then perhaps the hybrid format is best for you. If you have no time whatsoever and want to cram it all into one weekend and be done with it, then the in-person format may be better for you. The amount of hands-on practice is nearly identical for both formats, however obviously with the in-person option, we provide makinins and training tourniquets to practice with. 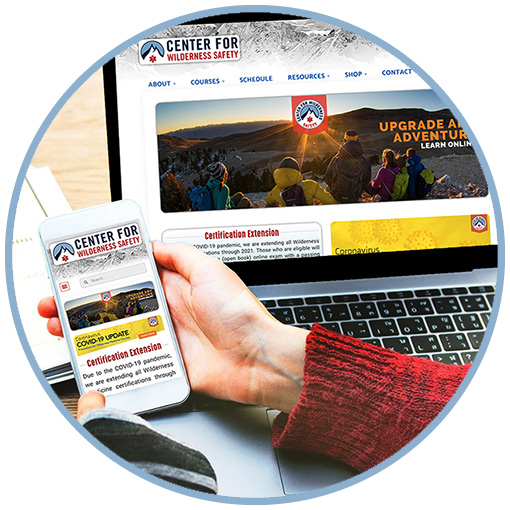 Blood loss is the leading cause of preventable death in multiple casualty events, like mass shootings, terrorist attacks and earthquakes. Significant external bleeding can also result from everyday events such as a motorcycle crash, or an industrial accident. Rapid control of bleeding at the scene of the event can be life-saving.

That’s why the American College of Surgeons, FEMA, and the US Department of Homeland Security have partnered together to ensure that:

Mass casualty events can happen at anytime and anywhere. At your workplace, at the game, during your commute, or even at your house. Stop The Bleed training will equip participants with the knowledge to save lives.

This FREE 1 to 2-hour training course teaches basic life-saving medical interventions, including a brief Active Shooter preparedness presentation and methods to control severe bleeding. Taught by experienced EMT's, paramedics, nurses, and combat medics, the course was developed in response to the call from the U.S. Department of Homeland Security and the Department of Defense to improve the chances of survival during an active shooter and other mass casualty events. In these circumstances, survival begins with bystanders.

Upon completion, participants will be able to: • Understand the principles of your response during an active shooter event. • Describe the progressive strategy for controlling hemorrhage. • Demonstrate wound packing and learn about topical hemostatic dressings. • Explain the rationale for early use of a tourniquet for life-threatening extremity bleeding. • Demonstrate the appropriate application of a tourniquet to the arm and leg.

This course is based on a curriculum developed by National Association of Emergency Medical Technicians and modified and taught by Center for Wilderness Safety.

Who Should Be Trained?

EVERYONE! Severe bleeding injuries can result from natural and man-made disasters and from everyday accidents, as well as from catastrophic and terrorist incidents. If left unmanaged, it can kill within minutes, potentially before trained responders can arrive. Bystanders who have been provided with basic tools and information on the simple steps they can take in an emergency situation to stop life threatening bleeding can SAVE LIVES!

Research has shown that bystanders – even with very little medical training – can become heroic lifesavers. Similar to the success of CPR or the use of an AED, improving public awareness about how to stop severe bleeding and expanding both personal and public access to bleeding control kits can be the difference between life and death for an injured person.

Who Can Take This Course?

EVERYONE! Learning to control bleeding is an essential skill that anyone can apply to save lives, just like CPR. In particular, these skills are important for non-tactical law enforcement, firefighters, security personnel, emergency coordinators and teachers. In addition, we recommend that all workplaces, schools and churches have multiple employees/members trained in bleeding control.

If you have any questions, please contact us at contact@wildsafe.org.

Can You Come Teach At Our Location?

We will work with you to develop a program for your workplace. We will prepare your trainers, emergency coordinators, or other qualified individuals to provide bleeding control training. The minimum number of participants recommended is at least 6, however the more, the better!

For more information on setting up a workplace training program for your company, school or organization, please contact us at contact@wildsafe.org. In recognition of the growing threat of mass casualty events and the need for enhanced training of bystanders to manage life threatening bleeding in these situations, we encourage the installation of bleeding control kits in public buildings where large numbers of people gather.

These kits will provide the tools to allow immediate management of life-threatening hemorrhage until EMS providers can arrive. Events such as the Boston Marathon bombings and recent mass shootings highlight the need for increased availability of effective, commercial tourniquets. Improvised tourniquets are often ineffective and can actually make bleeding worse if arterial inflow is not occluded. Unlike other hemostatic agents, QuikClot is impregnated with kaolin, an inorganic mineral that accelerates the body’s natural clotting ability and produces no exothermic reaction. So what does it do? If one were to apply well-aimed direct pressure using gauze to a severe, potentially life-threatening bleed, it would take roughly 20 to 30 minutes to clot (proteins building a mesh in the blood vessel to close the open bleed). When well-aimed direct pressure is applied to the bleed using QuikClot instead of gauze, a full clot should be formed within two and a half minutes or less! A Bleeding Control Kit contains only the essential medical equipment and supplies required to save a life in the event of immediate, life threatening bleeding.  A kit can be designed for a personal or home situation or for a larger more public venue.

Public access kits should contain supplies to treat multiple victims, and may also include specialized contents such as QuikClot (hemostatic), a chest seal (for open chest wounds), and an ultralight litter to quickly move a victim to safety.

Where Should Bleeding Control Kits Be Mounted?

Large multi-person commercial bleeding control kits should be mounted in all public access areas including but not limited to those listed below:

Bleeding Control Kits should be mounted right next to all existing Automatic Defibrillators (AED). We also recommend that a smaller, personal kit be kept in or along with your emergency or disaster supply bag or kit, in your car, with your camping gear, etc.

Where Can One Buy Bleeding Control Kits?

While there are several commercial companies that offer bleeding control kits, CWS does offer basic and advanced Bleeding Control Kits which can be kept in the same wall-mounted cabinets as most AEDs, and are small enough to easily fit in most glove compartments, desk drawers, and even in your backpack!

Click to learn more about our Bleeding Control Kits - or you can purchase the items individually and put together your own kit as well.

When purchasing your own individual tourniquets, we would recommend either the C-A-T (Combat Application Tourniquet) or the SOFT-T (Special Operations Forces Tactical Tourniquet Wide), both available online at the CWS First Aid Gear Shop.

Can't I Simply Improvise a Tourniquet?

Belts cannot typically be tightened enough; rope or string is too thin to actually stop arterial bleeding and will just cause more tissue damage, while not stopping bleeding.

When purchasing your own individual tourniquets, we would recommend either the C-A-T (Combat Application Tourniquet) or the SOFT-T (Special Operations Forces Tactical Tourniquet Wide), both available online at the CWS First Aid Gear Shop.

If your group or organization is interested in sponsoring a Free 2-hour STOP THE BLEED course at your location, (in Northern Virginia, Washington DC & Maryland ONLY) simply click the link above. Please note that we are scheduling courses out in advance (late Spring into early Summer) due to COVID-19 precautions.